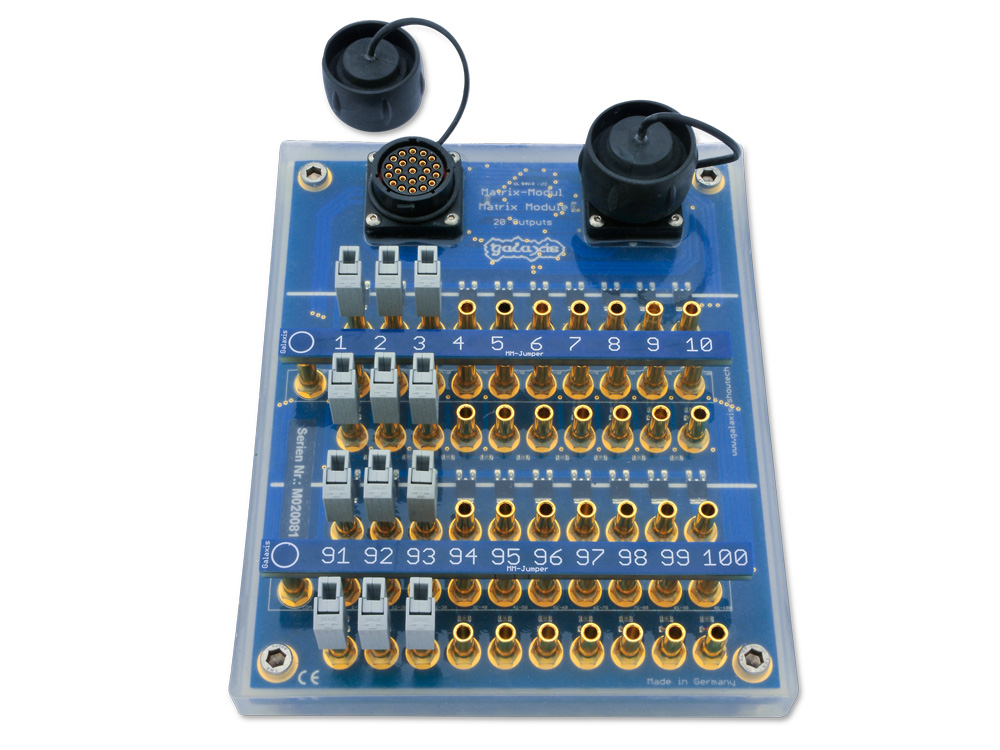 The Split Matrix Modules can be linked to a PFE Advanced 10 Output via the multicore cable to extend the number of outputs to up to 100 via intervals of 10 or 20. The modules can be assigned any output numbers from 1-100 using the coding bridges and are encapsulated in a highly durable silicon coating.

(Ex. VAT)Adaptor Board for PFE

The Split Matrix Modules work just as the Matrix Modules with 50 or 100 Outputs. The difference is that the Split Matrix Module are ideally suited to fire pyrotechnical effects on numerous individual positions by using only one receiver. Typical applications are the installation of effects on the facades of buildings, large front pieces and the usage of pre-assembled platforms for stadium displays. The modules come with four threads on the bottom side and due to that they can easily be mounted on platforms or steel ropes.
As usual all parameters of all outputs can be freely programmed (cue number assignment and step delays). The parameters of all outputs can be edited and checked either directly at the receiver or remotely by using the controller PFC Advanced or a notebook computer in conjunction with our wireless USB Modem.

Every Split Matrix is equipped with two connectors for the multicore cables, so that another cable can be used to connect to the next Split Matrix Board. Star shaped as well as line shaped cable networks are possible. Output 100 is used to calibrate the resistance metering and should be used as close as possible to the receiver so that the cable resistance of the additional wiring is taken into consideration when the device is measuring the resistance of the firing lines.

By using coding bridges the output group(s) a module should have can be determined. It is also allowed to used the same output group on several modules. This is equivalent to a parallel connection of e-matches.

Both, the sockets on the Split Matrix Modules and the connectors of the multicore cables are gold-plated.